Putting Money in its Place

Learn insights and practical “tools” that will help you examine your attitudes about money, make decisions as a team, make a budget, spend wisely, give generously, and save for the future.

Expect to change and grow. The practical, cross-cultural truths in these easy-to-read pages will make a big difference in your marriage—whether it is young-to-old, great to not-so-great.

This book is the seventh in Doug’s Britton’s eight-book “Marriage by the Book” series. These books help couples apply the Bible’s truths in every aspect of marriage. Although Putting Money in its Place is part of a series, it stands by itself as a complete book.

FREE shipping for orders over $50

Save time — Order all eight books in the “Marriage by the Book” series as a bundle! 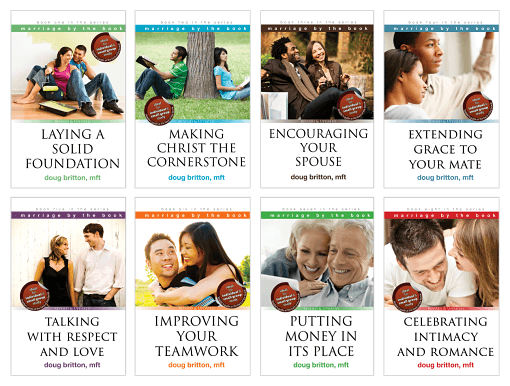 Putting Money in its Place is:

There’s no need to buy a separate marriage book, workbook, and leader’s guide for small groups—this book includes all three. You have the flexibility to use it however you want.

You won’t read secular advice with a sprinkling of verses. Instead, you will be transformed as you learn how to turn to God and apply his Word.

Since Laying a Solid Foundation is based on the Bible, its truths apply to every racial and ethnic group. When purchasing this book, you can choose a multicultural cover or an African-American cover.

“I have known Doug and his wife for many years. Many relationships in our church have been strengthened and enriched through the use of his ‘Marriage by the Book’ series.”  Ephraim Williams, Pastor, St. Paul Baptist Church (Sacramento, CA)

This book doesn’t just tell you what to do—it shows you how to do it with easy-to-follow steps. Real-life stories and examples illustrate key points.

“Practical Practical Practical! ‘Marriage by the Book’ is for couples who really want a strong marriage. Doug Britton puts the cookies on a shelf where it’s easy to reach them, using the Bible plus simple exercises to do it! I recommend every couple go through this series in a date night or in a small group with other couples.”  Tom Tunnicliff, Ed.D., Pastor of Chaplaincy, Elmbrook Church (Brookfield, WI)

“Make it personal” questions, quizzes, and exercises help you apply the lessons in your own marriage.

“‘Marriage by the Book’ is a life-changing series that will bring Christ into your marriage. The series will guide you step-by-step as you wrestle with the right questions, so you can see Christ-centered results. Whether your marriage is healthy and thriving or needing an overhaul…this series will help you. I know this because it’s helped my marriage.”  Craig Sweeney, Lead Pastor, Heights Church (Citrus Heights, CA)

Author and Bible-based Marriage and Family Therapist Doug Britton has helped hundreds of thousands of people as a therapist, clinical director of a treatment center, seminar speaker, radio co-host, and author of over twenty books. In each book of the “Marriage by the Book” series, Doug draws upon his extensive experience counseling married couples. More importantly, he goes directly to the Bible and applies its truth and wisdom to problems couples face today.

Chapter 1:
Be a Faithful Steward

You may be surprised as you read the first two chapters of this book. They don’t deal with budgeting, saving, tithing or many other topics you might expect. Instead, these chapters discuss our attitude about money. Once our way of thinking about money lines up with God’s, it’s much easier to tackle the practical matters.

The most important principle is to remember whose money we are talking about. It’s not yours. It’s not your spouse’s. It is God’s.

Nebuchadnezzar, one of history’s most powerful kings, learned this the hard way. One day he went for a walk. As he strolled he said, “Is not this the great Babylon I have built as the royal residence, by my mighty power and for the glory of my majesty?” (Daniel 4:30).

God’s answer was quick and to the point. He took away the king’s sanity and drove him outside to eat grass like a cow. Seven years later, when God restored Nebuchadnezzar’s sanity, the king no longer exulted in his possessions, but glorified God as sovereign over all (Daniel 4:34-37).

Recognize that God owns everything.
God’s ownership of everything is a foreign concept to most of us, just as it was to Nebuchadnezzar. We like to think of our money and our possessions. Yet the Bible says God owns everything. All things were created by him and for him (Colossians 1:16). Everything belongs to him.

To the LORD your God belong the heavens, even the highest heavens, the earth and everything in it. (Deuteronomy 10:14)

For every animal of the forest is mine, and the cattle on a thousand hills. (Psalm 50:10)

“The silver is mine and the gold is mine,” declares the LORD Almighty. (Haggai 2:8)

You might ask, “But don’t some Bible verses, such as Proverbs 3:9 and Colossians 4:15, refer to people owning possessions?” Yes, they do, but underlying these verses is the knowledge that everything belongs to God.

For everything in heaven and earth is yours. Yours, O LORD, is the kingdom; you are exalted as head over all. (1 Chronicles 29:11)

Describe how you will look at “your” possessions:

Acknowledge God’s ownership out loud.
My wife Skeeter likes to do a simple exercise to help her realize God’s ownership deep in her heart. She says out loud that God owns each particular thing in her life. She might say, “I’m in God’s house, sitting in God’s chair, writing with God’s computer, and looking out God’s window at God’s garden.”

When she talks like this, she feels refreshed. It seems much more special to live in God’s house than our house. She imagines God smiling down on the garden, sniffing a red rose, sending a hummingbird along to drink some nectar. As she acknowledges God’s ownership, she feels like a child again, when everything that was hers really belonged to her parents. She feels much more grateful for everything in her life.

Make it personal
Take a moment to say out loud all the things God owns that you happen to be using. For example, “I’m reading God’s book as I sit in God’s house. Pretty soon I’ll go for a drive in God’s car.”

After doing this, check this box: 

How did saying these words affect the way you think about ownership?

“I earned what I have. No one gave me anything.”
Nebuchadnezzar’s sin was one of pride and the illusion of self-sufficiency. In essence, he said, “Look at what I did all by myself.”

Many people have similar thoughts. It’s easy to say something like, “I earned my money. No one gave me anything. I had to work for it.”

You may have put in long hours to get where you are. Yet it is God who created you in the first place and gave you the strength and talent to make money.

You may say to yourself, “My power and the strength of my hands have produced this wealth for me.” But remember the LORD your God, for it is he who gives you the ability to produce wealth, and so confirms his covenant, which he swore to your forefathers, as it is today. (Deuteronomy 8:17-18)

For who makes you different from anyone else? What do you have that you did not receive? And if you did receive it, why do you boast as though you did not? (1 Corinthians 4:7)

Make it personal
Do you take credit for your possessions and accomplishments?
 Yes  No

Why should you give God credit?

Why do so many marriages have problems?
Most marriages start out with two people who are certain they can craft a wonderful union. Yet as the years go by, many never experience the passionate, joyful life they expected. Author Doug Britton says a key reason is that most people do not know how to create a great marriage God’s way.

Is my marriage hopeless?
Regardless of your situation, there is hope—the sure hope that comes from God and the truth of his word, the Bible.

What if my spouse won’t read with me?
It’s ideal if you both read this book. However, if your spouse doesn’t want to join you, read it on your own. Learn how to be the best husband or wife possible. God can perform miracles in your personal life—and in your marriage—even if you study on your own.

Can I use this book for pre-marriage mentoring?
Yes. It covers the most important truths couples need to know at the beginning of their journey together.

What are some topics covered in “Putting Money in its Place”?
In these pages you will discover many Bible-based insights and practical tools. A few examples:

Digging deeper
Do you and your spouse disagree about finances? Do any of these complaints sound familiar?

If some of these complaints sound familiar, don’t be discouraged. Many couples voice similar frustrations every day. Even if you don’t criticize your spouse or get into arguments over money, you may face a common problem — too many expenses and not enough money.

God knows handling money is challenging. That’s why there are so many verses about it in the Bible. In Putting Money in its Place, you will discover practical, biblical advice that will help you no matter what your financial situation is.

Whether you are financially stable, struggling with debt, or facing a crisis, these pages will give you hope, encouragement, and practical advice to help you handle your finances and money God’s way.

Marriage by the Book — 8-Book Series

Marriage by the Book — 8-Book Series